Introduction to Paul's Letter to the Ephesians

by Dr. Ralph F. Wilson
Part of JesusWalk -- Vision for the Church

As we begin our study of the Letter to the Ephesians, it's helpful to provide a brief introduction. We won't be studying the entire epistle, just dipping in here and there. But for a moment, let's look at the letter as a whole.

First, let's examine authorship, since how we will interpret Ephesians will be strongly affected by our identification of the author. Until the late 18th century, Pauline authorship was uncontested. But since F.C. Bauer questioned Pauline authorship in 1845, it has become popular to deny that Paul was the author and speculate about others. In fact these days, the majority of critical scholars hold this view for several reasons:

. Ephesians includes a number of words not found in other Pauline letters. . The first half of the Letter, especially, has a full and lofty style, unlike other Pauline letters. . The Letter's view of Christ is cosmic in scope and the author's understanding of the Church, too, is advanced. . Many elements of Ephesians are similar to Colossians, so much that some scholars see "borrowing" from the ideas in Colossians.

Of course, each of these objections can be answered by those who believe Paul to be the author. Paul is a highly educated man, quite able to express himself in different ways, depending upon his knowledge, the revelation he is seeking to express, and the heresies he desires to combat. If you consider the different styles and language usage skilled communicators are capable of today, it's not hard to grant those abilities to Paul. The theology is not discontinuous with other Pauline letters, but builds on them, reflecting growth in understanding that comes from both revelation and theological reflection resulting in a bigger vision of Christ and his church. And as for borrowing from Colossians ... if Paul is the author of both Colossians and Ephesians, the concept of borrowing becomes pretty silly.

There are two very good reasons to see Paul as the author of Ephesians.

. Ephesians was considered authored by Paul from the earliest days of the church, and quoted by the earliest of the Apostolic Fathers -- Clement of Rome, Ignatius, Hermas, and Polycarp. Even the non-orthodox acknowledged it as Pauline -- Marcion, Gnostic writers, the Nag Hammadi documents, and others. In the early church, Pauline authorship was never once questioned. . Paul claims to be the author (1:1), and reflects on his "stewardship of the mystery" (3:2-6), the nature of his apostolic ministry (3:7-13), his imprisonment (3:1; 4:1; 6:20), his first-person appeals and prayers for his readers, his request for prayer (6:21-22), and his comments about Tychicus. The literary device of pseudonymity was common in the early Christian centuries, but deliberate deception? Since the author claims to be Paul (1:1; 3:1) and personally solicits the readers' prayers, anyone besides Paul claiming this would be purposely deceiving the readers -- hardly worthy of a writer who tells us to "put off falsehood and speak truthfully" to our neighbor (4:25).

I believe Paul was the author of Ephesians and am joined by a number of recent scholars, including Marcus Barth (Anchor Bible Commentary, 1974) and Peter T. O'Brien (Pillar New Testament Commentary, 1999).

Paul obviously wrote Ephesians from prison (3:1; 4:1; 6:20), but prison where? We can't be sure, but likely in either Caesarea or Rome. Most who hold Pauline authorship date the Letter approximately 60 to 62 AD from Rome.

The Letter seems to have been written to the Church at Ephesus (1:1), though it doesn't directly address problems in that church as do some other letters. It seems more like a tract than a personal letter, and was probably intended as a circular letter to be read in the house churches of Ephesus and western Asia Minor (the western portion of present-day Turkey).

Ephesus was founded by Ionian colonists about 1100 BC and over the next millennium ruled successively by the Persians, Greeks, Macedonians, and others. Rome ruled the city from 69 BC for the next 200 years. It prospered and became the provincial capital and leading city of the entire region. Estimates of its population in the first century begin at a quarter million inhabitants and go up from there. 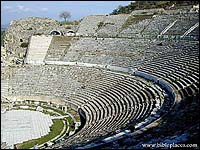 It was famous for its temple to the goddess Artemis (Diana of Ephesus), a huge structure made of marble, 220 by 425 feet at its base, supported by beautiful pillars and rising to a height of 60 feet, considered one of the seven wonders of the ancient world. The city has been studied by archeologists since 1895 and the work continues. Some of the important buildings, present during Paul's ministry, include a huge theater on a hillside that could seat 24,000 people, mentioned in Acts 19:29ff. Others were the town hall (Prytaneion), the commercial market (Agora), baths and gymnasiums, a medical school, and a stadium 229 meters long and 30 meters wide built during Nero's reign (54-68 AD).

A Jewish synagogue existed in Ephesus (Acts 19:8), though archeologists haven't discovered it yet. The Jewish community possessed citizenship, were exempted from military service, and granted freedom to practice their religion according to their traditions.

Why was the Letter written? Since Paul's founding of the church, the Ephesian believers seems to have won many Gentiles to whom Paul's Letter is now directed. They were converts from a Hellenistic environment of mystery religions, magic, astrology, etc. They feared evil spirits and weren't sure about Christ's relationship to these forces. They also needed encouragement to adopt a lifestyle worthy of Christianity, free from drunkenness, sexual immorality, theft, and hatred. They also may have lacked respect for the Jewish heritage of their faith.

Paul uses a number of words in Ephesus that would have been familiar to his Gentile Christian readers from their former religions -- head-body, fullness, mystery, age, ruler, etc. A century later this kind of terminology was used by full-blown Gnosticism. But Paul uses these words to demonstrate to his readers that Christ is far above and superior to any hierarchy of gods and spiritual beings -- that they are all lesser beings under Christ's feet. The language of Ephesians serves an apologetic function for the Church in a pluralistic society.

Paul develops several themes -- the greatness of God, the exalted Christ, present salvation, the status of believers "in Christ," the unity of Jew and Gentile, the struggle with powers, the ethical obligation of believers, Paul's apostolic ministry, and the church, the latter being the special focus of our interest in this study.

The structure of Ephesians can be looked at in halves. The first half, chapters 1 through 3, concern theological or doctrinal issues, while the second half, chapters 4 through 6, deal with ethical and practical outworkings of the Christian faith.

Narrow Focus of the Study

My particular interest in the "Vision for the Church" study is to examine five particular aspects of Paul's vision for the Church of Jesus Christ and to focus narrowly on those. Yes, this means that we miss much of the richness of the Letter to the Ephesians, but we will gain important insights into the Church that we can apply today in the congregations where are members and where serve in various aspects of ministry. I invite you to join me in this exploration of the Church as we study Paul's Letter to the Ephesians.

Some references used in this section. See standard references for abbreviations.

Part of JesusWalk -- Vision for the Church
Bkmrk