Palm Branches as a Symbol of Victory 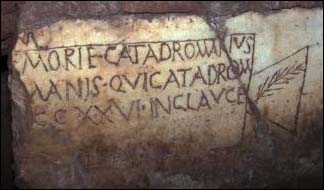 The palm-branch, which the seer of the Apocalypse puts into the hands of the elect, is the sign of victory in heaven in Christ's presence.

"After this I looked and there before me was a great multitude that no one could count, from every nation, tribe, people and language, standing before the throne and in front of the Lamb. They were wearing white robes and were holding palm branches in their hands." (Revelation 7:9)

In 1688 it was decided by the Congregation of Rites that the palm when found depicted on catacomb tombs was to be regarded as a proof that a martyr had been interred there. Subsequently this opinion was acknowledged by Mabillon, Muratori, Benedict XIV and others to be untenable; further investigation showed that the palm was represented not only on tombs of the post-persecution era, but even on pagan tombs.

Palm branches on tomb stone from the catacombs