Bkmrk
The Agnus Dei or Lamb of God symbol, typically shows a lamb, holding a cross or a flag. The Agnus Dei probably goes back to 5th century Rome. Discs of wax imprinted with the lamb, blessed by the Pope, were used from the ninth century, and probably earlier.

One of the few Christian symbols dating from the first century is that of the Good Shepherd carrying on His shoulders a lamb or a sheep, with two other sheep at his side. Between the first and the fourth century eighty-eight frescoes of this type were depicted in the Roman catacombs.

In the Agnus Dei symbol, the lamb was used to symbolize innocence and was also a sacrificial animal.  the Agnus Dei, or Lamb of God, is an ancient symbol of Christ and His sacrifice. The cross stands for Christ's victory over sin and death. Biblical references include John 1:29 and Revelation 14. In ancient examples of the Agnus Dei may be seen lying upon the Book of Seven Seals or carrying the Banner of Victory. It must be crowned with a three-rayed nimbus or halo, signifying that it is a symbol of divinity. In other examples the Lamb stands upon a hill from which flow the Four Rivers of Paradise, signifying the Four Gospels.

Paintings of Lamb of God or Agnus Dei 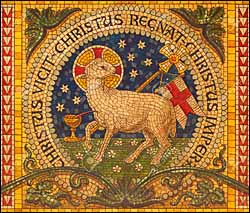 Iconography of the Agnus Dei

Part of JesusWalk -- Behold the Lamb of God
Bkmrk